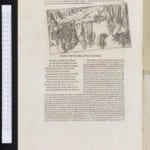 Sandro Botticelli was born in Florence about 1445. In 1470, aged just 25, and shortly after printing was introduced to Italy, his prodigious talent led him to open his own studio. He flourished under the patronage of the Medici family and was invited by Pope Sixtus IV to paint frescoes in the recently restored Sistine Chapel of the Apostolic Palace, almost three decades before Michelangelo wielded his brush and brilliance to the chapel’s ceiling.
Dante’s La Commedia, printed in Florence by Nicolaus Laurentii (also known as Niccolò Tedesco), 1481. With text and images printed on two different kinds of press in different print shops, there was always the chance for this kind of mishap. Image courtesy of Bodleian Library, Oxford University. Shelfmark: Auct. 2Q 1.11Prior to leaving for Rome in the summer of 1481, Botticelli produced drawings for an illustrated edition of Dante’s Divine Comedy. The drawings were to serve as models for Baccio Baldini’s twenty copper engravings. The book went to print before the illustrations were completed. Most surviving copies exist with just several of the engravings, some printed alongside the text, or inexpertly in the margins, while others have been pasted in at a later date. Although most commentators suggest that the edition, printed in Florence by Nicolaus Laurentii in 1481, was a failure, more than 130 copies have survived, suggesting that the print-run and subsequent sales were nonetheless pretty good. However, as a piece of book design, as an effort to combine engravings with metal type, it is by no means the greatest example.
An intaglio printshop with roller presses. Jan van der Straet. Nova reperta. Engraving, c. 1600. Image courtesy of the Folger Shakespeare LibraryDespite the advantages of metal engravings over woodblocks (considerably more durable and permitting finer detail of line), they are seldom seen in fifteenth-century books. The woodcut is an ideal counterpart to movable type. Both are relief processes, meaning that woodblocks and type could be set in the same form and printed at the same time. On the other hand, intaglio printing, like etchings and engraving in metal plates, require printing on a separate roller press (similar, in principle, to a mangle), as they require significantly more pressure than can be achieved in a flat-bed press designed for relief printing like letterpress. (Intaglio also prefers stiffer, more viscose inks.) The intaglio technique, then, is the opposite of relief printing as the ink sits not on the surface, as is the case for relief printing, but below the surface in the engraved or incised crevices and grooves, thus extra pressure is required to push or emboss the paper into those inked grooves to transfer the ink to the paper. Leonardo da Vinci provided illustrations for Luca Pacioli’s famed De divina proportione (On the Divine Proportion) and although written at the close of the fifteenth century, was not printed until 1509 by Paganino Paganini in Venice.

The 1481 Florentine edition of Dante is a rare fifteenth-century example of the involvement of a significant Renaissance artist in book illustration. The only other artist of the fifteenth century, who comes to mind, is that genius pioneer of the Northern Renaissance, Albrecht Dürer, who published his books with, among others, his godfather, Anton Koberger.
“Botticelli is the first, and perhaps the only artist whose pictorial conception of the Divine Comedy does not fall short of the poetical significance.”Drawings by Sandro Botticelli for Dante’s Divina commedia, F. Lippmann, 1896, p. 19 The drawings upon which Baldini’s engravings were based have not survived, but a later set of drawings for an ambitious but unfortunately unfinished manuscript edition of Dante, likely commissioned by Lorenzo di Pierfrancesco de’ Medici (who also commissioned Primavera), do survive and, even in their unfinished state remain, perhaps, the most visceral until those of William Blake and Gustave Doré‘s in the nineteenth century.
Beatrice explaining to Dante the nature of the heavens. Drawing by Sandro Botticelli, c. 1490 Consider your origin;
you were not born to live like brutes,
but to follow virtue and knowledge. The Divine Comedy, Canto XXVI, ll. 118–120Although engravings were seldom used in fifteenth-century books, they appear, along with etchings, with increasing frequency throughout the sixteenth century, so that by the beginning of the seventeenth century, they have all but replaced the woodcut as the principal source of book illustration until their resurgence in the nineteenth century.