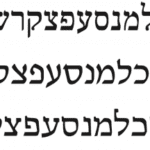 Just to be clear from the start: I don’t speak Hebrew. When I first started working with Hebrew type, I couldn’t tell one letter from another, or even whether the page was right-side-up or upside-down. In short, I was completely unqualified to work with the Hebrew alphabet.

As odd as it may seem, though, there were some advantages to my lack of knowledge. Without any preconceptions, I was open to all possible design options, and I was prepared to undertake serious research. Most importantly, I understood that the project would be a long-term commitment, and I was prepared to give it as much time as it needed.

Even so, the question remains whether an outsider can make a useful or inspiring contribution to a script that he is not familiar with. I am a firm believer that it is possible, and in fact many great advances in type design and typography have been made by people who were outsiders or even illiterate, since the skills required to speak a language are quite different from the skills required to work with its visual aspect. Of course, an outsider has to work harder to learn a script’s history, traditions and conventions, mapping out its expressive potential. I knew that in the process of exploring Hebrew type I would make silly mistakes that would never even occur to a native designer, that coming to understand the historical models, references and writing tools would be a long journey, but having already designed Cyrillic, Greek, Armenian, Inuktitut and Arabic typefaces, I was willing to take on this challenge.

Part of my motivation came from discussions with Israeli friends who told me that the most useful Hebrew typefaces were designed in the early 20th century. The typefaces of Rafael Frank (1867–1920), Henry Friedlaender (1904–1996), Ismar David (1910–1996), and Zvi Narkiss (1921–2010) have come to define the look of modern Hebrew typography, and even now, many decades later, publishers continue to return to them for their legibility and usefulness for setting large quantities of text. Newer typefaces have never quite overtaken the three most popular, Frank Rühl (C.F. Rühl, 1910), David (Intertype, 1954), and Hadassah (Amsterdam type foundry, 1958).
Frank Rühl (C.F. Rühl, 1910), David (Intertype, 1954), and Hadassah (Amsterdam Type Foundry, 1958)I was also motivated by my interest in Arabic script. I’ve spent a decade working with Arabic type, and more recently, together with Kristyan Sarkis, started a foundry specialising in the development of original, contemporary, authentic Arabic typefaces. Arabic designers may have little motivation to deal with Hebrew and vice versa, but the fact is that Arabic and Hebrew are related, and designing them in unison can create very useful type systems for the region, so I became interested in designing typefaces that support both scripts, as well as Latin.

I started with the most difficult task, designing a newspaper typeface for running text at small sizes, as I thought that designing a more complex style would provide future solutions to the simpler styles such as display fonts. Although I used Greta Text as a starting point, my intention was not to emulate any of its particular structural details, but rather to create an authentic, contemporary Hebrew typeface with similar formal parameters (width, weight, proportions, spacing, curve tension, texture) informed by Hebrew conventions.

It soon became apparent that I needed a consultant. I approached New York typographer Misha Beletsky, who was extremely helpful in setting up the direction and construction principles of a new typeface. He is a self-described purist, a strong proponent of following historical models, and critical of the mix-and-match approach which has became so popular in multi-script typography. At his suggestion, I looked closely at Friedlaender’s Hadassah as a model of a Hebrew typeface designed for legibility. I also studied Adi Stern’s MA dissertation ‘Some Guidelines and Recommendations for the Design of a Hebrew Book Typeface’, which was helpful in gaining a better understanding of the proportions of Hebrew characters. I collected most of the available books on Hebrew typography and various calligraphic styles and dug through them in search of solutions.
Early sketches of Hebrew letter terminationsThe Hebrew script is deceptively simple. It consists of just 22 characters, has no upper/lower case distinction, no required ligatures and no contextual shapes. Very quickly, however, I encountered two major problems. The first was that my idea of letter proportions, the balance of forms and counter-forms, ran completely contrary to the expectations of Hebrew readers. Following the optical rules that I was used to, I made complex shapes such as צ and ש wider, and simpler shapes such as ד and ה narrower. This looked odd to native designers, and retraining my eyes and brain took years of work. The second biggest problem were the serifs. Serifs are foreign to most non-Latin scripts, but the fairly high contrast of Greta Text requires some ending at the end of the strokes. I tried dozens of solutions for stroke terminations, and none seemed to work. Calligraphic endings seemed more natural to high-contrast Hebrew letters, but alien to the crisp lines of Greta Text. Sharp geometric endings fit the design of Greta, but looked out of place on the Hebrew characters. In the end I settled on smaller, stylised endings inspired by the broad-nib pen. I discovered that the comparatively homogenous structure of Hebrew letters made it necessary to vary the endings slightly in order to avoid a monotonous texture in large blocks of text, and that individualising the terminations also helped to increase legibility and differentiate the glyphs.

In 2015, after four years of slow, continuous work, I was invited by professor Adi Stern to give a type design workshop at the Bezalel Academy of Arts and Design in Jerusalem. I took advantage of the opportunity to show Adi my work-in-progress and seek his feedback. He was encouraging, which gave me confidence to continue the work. I also met Yanek Iontef, an experienced and respected Israeli type designer, and now also my friend. And most importantly, at least for this project, I met another teacher from Bezalel, Michal Sahar.

Michal is both an established type designer with an eye for innovation, as well as a skilled and celebrated book designer. During my visit she mentioned that she was interested in Fedra Serif, and to my astonishment had already sketched a Hebrew version. She quickly became a close collaborator, and consultant on all our Hebrew types.
Early variations of the letter alef.
The underlined version was proposed by Michal Sahar, and finally implemented in Greta Text Hebrew.Back in The Hague, I welcomed Daniel Berkovic, a Bezalel student, for a month-long internship in our office. Daniel made a significant contribution to Greta Text Hebrew, first polishing my ill-conceived proportions, then going further and proposing new solutions to letters that I had struggled with (ש ,ת and א). Together we also completed Greta Sans Hebrew and submitted it to the Type Directors Club in NYC, where it won the Certificate of Excellence for 2016.

In spite of this international recognition I felt that the project still hadn’t quite achieved its goal, and I continued working on the Greta Text version, again with Daniel’s help. I went back and forth, sometimes accepting his suggestions, sometimes feeling that they transformed the project into something else. Daniel Grumer, who came to Hague to study at the Type & Media programme also contributed thoughtful advice, and worked with me on November Hebrew, which became Typotheque’s first released Hebrew typeface. Daniel also chose to work on Zico, a robust Slab serif which is typically challenging to interpret in Hebrew, where serifs look odd. He did a great job, and made Zico Slab Hebrew look natural. In 2016 I approached Yanek Iontef to work on the Hebrew extension of the Bodoni-inspired Parmigiano. All of these projects, while completely different, served as important lessons for me, allowing me to see Greta Hebrew from a different perspective. In the meantime, Michal Sahar completed Fedra Serif Hebrew and Fedra Sans Hebrew, using them in a number of book projects and designing unique cursive styles.

Finally in 2017, spurred by the completion of November, Parmigiano and Fedra, I felt that it was also time to finish Greta, the project which had started my interest in Hebrew in the first place. I compared different versions, prepared notes and shared them with Michal.
A proof of Greta Text from 2015, two years before the official release. The author believed that it lacked the personality of the original, and invited Michal Sahar to collaborate on the project.After six years of work it seemed to me that the Hebrew letter shapes were well executed but lacked personality, that I had managed to craft a legible typeface, but one perhaps too generically correct, too much driven by convention, lacking Greta’s personality. Michal responded not with just words, but with completely redrawn characters. It was a joy to see solutions that had escaped me, not just a good Hebrew typeface, but a deft adaptation of Greta Text.

In the world of Hebrew script I will always remain an outsider in spite of the experience and insight that I have gained through these projects. This long process allowed me to discover my own limits, to realise when to seek the help and advice of others. I thank all my collaborators for their patience and their contribution and in making those typefaces what they should be. I am pleased to introduce all new Typotheque Hebrew collection.