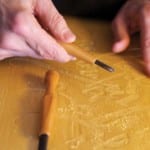 I started the Endangered Alphabets Project in 2010 when I discovered that about a third of the world’s 120-plus writing systems may become extinct within the next one or two generations.

As you probably know, every culture has its own spoken language, and in many cases its own written language, too — a writing system it has developed to express and record its own beliefs, its own experiences, its understanding of the world. What the members of that culture have collectively written in that script is the record of their cultural identity: spiritual texts, historical documents, poems, deeds, letters between family members.

Especially for indigenous and minority cultures, though, there is tremendous pressure — institutional pressure, governmental pressure, economic pressure, even military pressure — to abandon their traditional writing systems and use some more “convenient” or “global” script. If they give in to that pressure, everything written in their own script becomes incomprehensible and lost to the very culture that created and wrote in it.

The United Nations’ Universal Declaration on the Rights of Indigenous People says: “Indigenous peoples have the right to revitalize, use, develop and transmit to future generations their histories, languages, oral traditions, philosophies, writing systems and literatures, and to designateÂ and retain their own names for communities, places and persons.”

In fact, not only are such rights rarely protected by law, but the world’s governments themselves are the most likely candidates to infringe on or refuse such rights.

Denying members of a minority culture the right to read, write and speak in their mother tongue defines them as inferior and unimportant, and leaves them vulnerable, marginalized, and open to abuse. The extent and quality of education go down, while levels of homelessness and incarceration, and even suicide go up — the kind of situation that has led to the endangerment or eradication of hundreds of Aboriginal languages in Australia and Native American languages in the U.S.

In an effort to slow this catastrophe and even, in some cases, to revive endangered traditional scripts, I’ve spent the past seven years carving pieces of text or even individual letters and words in many of these endangered alphabets. These carvings have been exhibited all over North America and Europe, including at the Smithsonian.

But what I’ve come to see, perhaps too slowly, is that documenting and speaking out about cultural genocide is not enough. To save and revive a language, you have to start with the children, and to reach children you need games.

We are so accustomed to word games we often don’t realize how vital they are. Games such as Scrabble, Boggle, Hangman and Bananagrams teach not only spelling but letter manipulation and word recognition, and instill a deep and increasingly complex innate sense of letter combinations and language structures.

Perhaps even more importantly, they reinforce and develop the understood interrelationship between spoken and the written words, and they instill in users a sense that these words, not only in their meanings but in their very shapes and design, are profoundly and inextricably connected to everything we know, how we think, and what we believe.

Designing word games in non-Latin scripts, though, turns out to be a lot trickier than it seems to those of us who grew up on Boggle. In a minute I’m going to be asking for your help, but first let me explain the fascinating underlying issues.

Let’s start with an easy one. Many writing systems use waaaaay more symbols than we do. Khmer, for example, uses more than 80 letters, Pahauh Hmong has more than 60 syllabic consonants, plus tone indicators. If you’re making a Scrabble-type game, you’d need awfully big trays to hold your tiles!

More subtly, and I think more interestingly, we Latinates (and English speakers and writers in particular) subliminally think of writing in terms of the origins of our own script. Let me explain.
Endangered alphabets; from left to right: Mongolian, Manchu, and Baybayin.To us, each letter is a small monument like the Roman monuments from which we drew our sense of formal typography: upright, balanced, capable of standing alone on its own two feet. In an alphabet game, then, we can play with letters as if they were Legos, picking them up, combining them, detaching them, recombining them to form other words.

In part, this is because of the visual connotations of our letters, their imperial symmetry and balance. But it’s also because those visual qualities are more important than the sounds they convey. Despite the robust physicality of our printed letters, they are actually almost absurdly inexact. Every vowel can be pronounced in multiple ways, and consonant clusters such as gh are notoriously ambiguous.

The result is that we have a writing system that is notoriously hard for non-English-speakers to learn, yet works astonishingly well for three-dimensional letter-based games such as Scrabble and Boggle. Stripped to their essentials, the letters work equally well for words that require them to be pronounced in all kinds of ways. If we have a U we can use it for GUT or, sounding entirely different, for GUEST.

Non-Latin-based writing systems are in many ways much more conscientious in phonetically representing the spoken word but that also makes them less suitable for certain word games. The northern Thai script called Lanna faithfully represents a far wider range of vowel sounds than we hear and use, but to do so it uses a cluster of glyphs to represent every sound. Consequently, it is far less flexible for the gamer, and the game designer. Imagine yourself playing Scrabble in Lanna: you’d need a tray of maybe 20 tiles to have a hope of creating a single word, and you’d have to stack tiles on top of each other to represent sound combinations. It could be all kinds of fun, but it certainly wouldn’t be easy.

Yet another challenge arises when you consider a word game in Mongolian. Not simply because Mongolian is a vertical script — that’s just a ninety-degree change of alignment. No, one of the delightful features of Mongolian is that it is inherently calligraphic. Every word begins with a certain set of flourishes and ends with another set of flourishes, and to achieve this graphic embellishment individual letters have different shapes depending on whether they are at the beginning or end of the word (in which case they are distinctly elaborate) or in the middle (in which case they are simple, straightforward and efficient). Perhaps this accounts for the fact that there is currently a resurgence of Mongolian calligraphy, but not of Mongolian Boggle!

So here’s my invitation to you. Well, two invitations.

The first is to help me design games that help children (and/or adults) in minority and indigenous cultures learn, or re-learn, their traditional alphabets.

These need to be easy and cheap to manufacture. Ideally they don’t need a reliable Internet connection or even a supply of electricity. I’m currently exploring wooden puzzles, sets of playing cards that have letters instead of numbers, a Scrabble-like board game, and domino-style games also with letters rather than number-dots. Send your thoughts to brookes@champlain.edu.

The second is that, as I need to fund the development, prototype manufacture, field testing, shipping and whatnot, I’d love it if you can back my current Kickstarter campaign. The campaign ends on August 3. Please help if you can!

The origins of abc