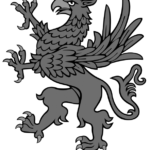 ﻿﻿﻿Grifo, the Portuguese word for griffin, a mythical creature with the head and wings of an eagle and the body of a lion. We can imagine how threatening this creature might appear, and would probably want to stay well clear of its sharp claws and beak. Grifo the typeface also has sharp serifs and terminals. It’s full of talon shapes, like the c, e, the bottom curve of the t, and, most obviously, in the commas and quotes. The name of such a hybrid creature like the griffin felt appropriate for a typeface that is itself a hybrid, both in terms of its letterforms and function. Grifo’s design draws on the rationality and extreme high stroke contrast of the neoclassic types, but has bracketed serifs and sharp triangular terminals, instead of ball terminals. Some serifs in the lowercase letters were removed, therefore a, d, and u are a mix of sans serif and serif forms. Moreover, because Grifo comprises different optical sizes, its suitable for both display and text settings.

It all started as a redesign of Catacumba, a typeface from 2008, inspired by the painted inscriptions of the Igreja de São Francisco church’s catacombs in Porto. The idea was to make a contemporary text face by cleaning up an old design, making it less clumsy, less decorative, and, so to speak, stripping it of its Victorian “clothing.” The design then steadily evolved into a completely new typeface with barely a trace of the old Catacumba design visible. Shapes became more and more rationalized, the curved lines of the slightly flared stems became straight lines, and for consistency, bowls, stems, serifs, and joints, were all made uniform. Eventually, letters transitioned from being hand-drawn, to being cut with a scalpel. All stems were cut horizontally both at baseline and x-height to give the alphabet a harder and simplified edge.

This meant that all hand-made qualities were replaced by a precise handling of the outline nodes, and that brought some difficulties to the process, exacerbated by the addition of an optical axis so that some of its design features might be translated to display sizes. The typeface grew into a family of 30 styles; 22 of them interpolated from 8 masters (4 romans & 4 italics). In the past I’ve kept myself away from designing such large families. One reason being that I could never allow myself not to manually correct problems that result from the rounding of point coordinates to integers, among other issues related to interpolation, in every single one of the interpolated fonts. In typefaces where preciseness and rationality are design features, it is important that, for instance, stems or white spaces that should have the same width, have exactly the same width. In Sans families this is easier because you practically only have to check stems and white spaces, and AFDK’s Stemhist is a great aid to that. In Grifo, however, it gets more complicated because many serifs also have to have the same exact construction, and no inconsistencies from coordinate rounding can be permitted.

Grifo would then have to be built in ways that would make the task of correcting the interpolated fonts a lot easier and more manageable.

Fortunately with Glyphs App’s amazing corner components you can have your serifs as a separate component and simply attach it to the corners of your stems. This guarantees not only that serifs are equal in the master fonts, but that they will also be consistent in interpolated instances, because the serif is interpolated as a separate object.

Stems and other parts of the letters were also components repeated in different letters. This allowed me to make sure that in the interpolated fonts, stems have the correct measurements. Consequently, the typeface became almost modular, but not quite. Some stems and many serifs are intentionally different for optical reasons, so variation itself, whether in stems, round strokes, or serifs became increasingly rationalized and deliberate. I guess I can say I couldn’t have made Grifo without Glyphs App.

The optical axis became especially necessary in this family for two main reasons: (1) to have a high stroke contrast and very thin hairlines in display settings; (2) to save as much space as possible, as the body size increases. Hairlines and serifs in a high contrast face can appear too fragile and weak in small sizes, while the thin lines of a text face can appear too strong when set in large body sizes. The spacing of a text font can also be too wide when it is set at display sizes. In headlines, letters can be narrower with a tighter fit, which not only looks better but also saves space.

Grifo L has an extreme high-contrast with very thin hairlines and sharp serifs. To allow for a tighter fit, say for compact headlines, letters sit closer together, ascenders are short and align at the cap height; while descenders are even shorter. In Grifo S, at the other end of the optical axis, letters are sturdier and wider and exhibit less stroke contrast. There is more space between letters, and extenders are longer. Grifo M, of course, is in the middle of the optical axis, between Grifo S and Grifo L. Accordingly it is intended for intermediate sizes. Glyph’s corner components were extremely useful, because I could test different serif variations and decide for the most appropriate size and shape for running text in Grifo S, or for headlines in Grifo L.

I intended for Grifo’s text styles to have the traits required of a text face: good readability by being ergonomic and sufficiently conventional and transparent. At the same time I wanted the fonts to save space in news-related or editorial contexts, and consequently, to be practical for the typographer who needs to fit a lot of content on the page. Merely condensing letters or squeezing them together would make the typeface look less natural, so my efforts were focused on space management. I wanted economy, but then I also wanted open counters and comfortable space between letters. As Adrian Frutiger beautifully observed, the spacial element, like in architecture, is the one we actually use.*

*Adrian Frutiger, Signs and Symbols, Their Design and Meaning

In Grifo the arches are relatively flat to allow for larger counters. The Serifs are slightly retracted, to permit slightly closer letter spacing without sacrificing too much white space. Some serifs were even removed on relatively frequent letters (a, d, and u) thus saving a little more space. Round letters were kept round, but letters a and s, that occur frequently, are narrower. As we move in the optical axis towards the display styles, letter spacing decreases and ascenders and descenders become shorter. Headlines can then be set with tight line spacing and larger body sizes, because words take up less space both vertically and horizontally.

Each of the size-specific subfamilies has five weights: light, regular, medium, bold, and black. The light weight is good for setting elegant titling, while the black weight, the most expressive member of the family, is well suited for striking headlines. For the medium weight I decided to have it just slightly heavier than the regular so that it could be used for matching the color between texts set in different body sizes. To counterbalance the mechanical overtone of the family, I wanted the italics to add liveliness and variety. The k is slightly flamboyant, v and w are round and the y has a swinging tail. There is also a little bit of variation in the angle of some strokes. Nevertheless italics still reflect the rationality of the romans in the serifs and some straight horizontal cuts —notice for instance the rationalized flags on v and w — but the lowercase alphabet as a whole has a traditional, almost copperplate-like feel to it.

Finally, to add a little more variety to the typesetting, or perhaps to give the text a more bookish feel, I decided to include OpenType alternate forms for a, d, and u with bottom serif-like terminals — in case the serifless forms are deemed too ‘clean.’

Thus the story of Grifo is complete. Every time I design a new typeface, I meet new challenges and, in overcoming them, I learn a little more both about the technical and aesthetic challenges of type design and of the audiences that read my letters.