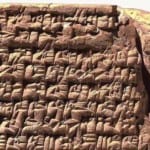 Recipes are as old as eating and recorded recipes date back to the invention of writing, with the most ancient examples from Mesopotamia, written in Akkadian cuneiform and dating to about 1750 BC. From late Imperial Rome, a collection of recipes from the late fourth or early fifth century, commonly referred to as Apicius, has survived via eighth- and ninth-century manuscript copies. Moreover, dozens of recipe books have survived from the Middle Ages, including the tenth-century Baghdadi cookbook by Ibn Sayyar al-Warraq and the fourteeth-century treatise on cookery and cooking techniques, La Viandier, written by Guillaume Tirel, chef to the Court of Charles V of France. The book includes a section on dishes for the sick, in which barley gruel and, naturally, chicken soup is recommended.
Detail of Babylonian cuneiform tablet from c. 1750. This tablet includes 25 recipes for stews. The recipes list the ingredients and the order in which they should be added, but does not supply measures or cooking times. Image courtesy of the Yale University Library: Near East Collection (YBC 4644).One of the very earliest English-language cookery manuscripts, The Forme of Cury, dates to about 1390 and was authored by cooks to king Richard II. Among its 196 recipes is one for ‘blanc mang’, forebear of the jelly-like British dessert, blancmange. The Middle English word ‘cury’ is from the old French word for ‘cookery.’
“Instead of eating with her fingers like other people, the princess cuts up her food into small pieces and eats them by means of little golden forks with two prongs.”– J.C. Giblin, From Hand to Mouth, 1987, p. 46Modern cooking has its origins in Renaissance Italy and, undoubtably, the most famous of fifteenth-century chefs was Martino de Como, or Maestro Martino. He worked for Cardinal Ludovico Trevisan (1401–65), a cleric famed for his fine food and entertaining. In a letter of 1450 the Cardinal mentions the very recent conquest of Milan at the hands of Francesco Sforza (a truly momentous event) as a mere footnote to talk of procuring the finest fish for an upcoming dinner held in honor of the visiting pope, Nicholas V. Maestro Martino, described by his peers as a prince of cooking, compiled Libro de Arte Coquinaria (‘The Art of Cooking’), a book that marks a watershed in the transition from medieval to Renaissance, or early modern, cuisine.
Some Early Printed Cookbooks
1475: First printed cookbook (Platina’s De honestate voluptate)
1485: First German cookbook (Küchenmeisterei)
1500: First English cookbook (Boke of Cokery)
1570: First illustrated cookbook (Scappi’s Opera)
However, the very first printed cookbook was published by Laurentius de Aquila and Sibylinus Umber in Venice, in June 1475. At about the same time an edition was published in Rome in the typeface of Ulrich Han (and it has been suggested that the book was published by an anonymous printer with types discarded by Han). The text, written by Bartolomeo Sacchi, better known by his pseudonym, Platina, owes much to the recipes of Martino, whom he acknowledges in the introduction. Platina’s cookery book, De honestate voluptate et valitudine (‘On Right Pleasure & Good Health’) was an immediate success. It was issued in at least eight editions in Italy before 1500 and was even cited by Leonardo da Vinci.
Opening contents spread of Platina’s De honesta voluptate et valetudine, printed by Laurentius de Aquila and Sibylinus Umber in Venice, 13 June 1475. Image courtesy of The Bavarian State Library in Munich.The appearance of the first printed cookbooks in the fifteenth century coincided with increased use of the fork. Although the fork had been known prior to antiquity, its use was mostly restricted to the kitchen for carving and serving. One story of its introduction to the European table credits an eleventh-century Byzantine princess who came to Venice to marry. Her use of a fork at the table caused quite a stir, with one observer noting that such a thing was “luxurious beyond belief”; and Venetian Church leaders condemned such gross affectations, declaiming, “God in his wisdom has provided man with natural forks – his fingers. Therefore it is an insult to Him to substitute artificial metallic forks for them when eating.” (Giblin, p. 46) By the fifteenth century its use in Italy was common. It spread to France via Catherine de Médici who brought them to Paris in 1533, and was in common use throughout much of Europe by the late seventeenth century.

The Roman Cookery Book: A Critical Translation of ‘The Art of Cooking’ by Apicius, 1958, Barbara Flower & Elisabeth Alföldi-Rosenbaum

The Viandier of Taillevent: An edition of all extant manuscripts, 1988, T. Scully

Not only were most of the earliest cookbooks rather vague on precise cooking techniques and measures, but they were not illustrated. Almost a hundred years would pass before the appearance of the first illustrated cookbook in 1570, with Bartolomeo Scappi’s Opera published by the Tramezzino press in Venice and supplied with 28 fine copperplate engravings (in some later editions substituted by woodcuts). Scappi was chef to cardinals and personal cook to two popes, Pius IV and Pius V. Before diving into the recipes, the author begins by outlining rather detailed instructions for setting up a kitchen. Typographically, the book is very well organized. The entire volume, running to some 900 pages, is set in a good italic type with italic all-caps for running heads, two-line roman drop-caps and a small number of ten-line decorated initials, plus the modest use of arabesque ornament – overall a fine example of typographic hierarchy achieved through a minimum of type styles and accoutrements.
Two pages (not a spread) from the first illustrated cookbook, Bartolomeo Scappi’s Opera,1570. Note the apparatus for removing a large cauldron from the fire. Image courtesy of The Bavarian State Library in Munich.

Today, cookbooks are frequent visitors to best-seller lists and their celebrity-chef authors are household names. However, collections of recipes, whether from a 4000-year-old Babylonian clay tablet or from a contemporary full-color, illustrated, typographic book, are testaments to our unfailing and undiminishing passion for preparing and enjoying food.■

This article is from: