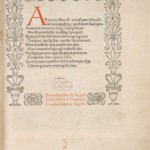 The book in its present form is a product of evolution, serendipity, and design. Its size and proportions accommodations to the human form: the length of our arms; the type size a concession to our visual acuity. Ostensibly, the form of the book has changed little in the past 500 years. The very first printed or typographic books resembled their manuscript forebears, but as printing spread rapidly throughout Europe in the fifteenth century, the printed book took on its own, unique characteristics. Page numbers, running heads, indices, colophons, printing in color – some unknown to manuscript book production – soon became commonplace.

The earliest printed books bore no titles, and like their manuscript exemplars, they began with an incipit, from the Latin, here begins. The incipit was most often the first line of the book, and sometimes, in both manuscript and typographic books, it was written or printed in another color – in the latter books most often in red. Bound books bore no titles on the cover or spine. That was a much later innovation.

“Even at the end of the [fifteenth century], well over 40% of the editions still had their dates printed nowhere in the book.” – Smith, p. 97

One of those peculiar elements was the title-page. The title-page marks the beginning of the book; it is an announcement, including title, author, date, and place of publication.

It was to be in Venice, the fifteenth-century world capital of book-making, that three Germans, Ratdolt, Löslein, and Maler, created the world’s first decorative title‐page for their 1476 quarto edition of the astronomer Regiomontanus’s Kalendarium, the very first book to be put out by their press. We might say that it is the first true title‐page. Other candidates, such as Schoeffer’s Bull of 1463 and Arnold ther Hornen’s Cologne edition of Rolewinck’s Sermon of 1470, lack the information required of a title‐page as we know it today. By contrast, Ratdolt and Company’s Kalendarium includes almost everything one might expect to see in a modern-day title‐page: title, author, date, and place of publication, bibliographical information that had hitherto be included in the colophon. And, although its presentation in verse rather than prose is certainly unusual by today’s standards, it is still recognizable as a title-page. In fact, the book’s title is not presented as as standalone element, but rather is to be found within the poem (second line) – a text that reads something like a modern-day publisher’s blurb. (Smith, p. 44n18)

“it is rare to find dates on title-pages during the incunable period and early sixteenth century. If dates were to appear anywhere in the book, they remained, for the most part, in the colophon.” – Smith, p. 97

The elegant decorative border of the title‐page comprises five woodcuts and is printed in outline, i.e., the background or ground is cut away, leaving just the outline. The book also contains Ratdolt’s first set of decorative initials which, like the title‐page border, are cut in outline.

That the title-page evolved as a means to utilize the opening blank page or leaf is sensible and convenient, but not entirely convincing. If the opening blank page was intended to protect the first page of text proper (as fifteenth-century books were invariably sold unbound), then why, once the title-page had become an established element of the book by the close of the fifteenth century, did the blank not reappear? (see Smith, pp. 52–3) Rather, I think that the adoption and success of the title-page is attributable to its utility, its unambiguous way of introducing the printed text – a consolidation of useful biographical information presented on the opening page – evidenced by the concomitant decline in the use of an incipit.

Though the origins of the title-page appear to be somewhat accidental, its survival through the subsequent 500 years undoubtedly testifies to its utility. And whether a lavishly illustrated sixteenth-century design, or a crisp, clean, sparse typographic page like those favored by the likes of Baskerville and Bodoni in the eighteenth century, the title-page serves not only as a reflection of prevailing typographic tastes, but as an invitation to one of humankind’s most magnificent inventions, the typographic book.