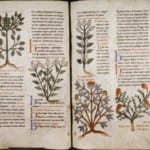 Since before agricultural civilization, humans have used plants for their special properties – to nourish and heal, to harm and to poison. The earliest written compilations of plants can be traced back to the second millennium BC, with early traditions in Egypt, Mesopotamia, China and India. In Greco-Roman antiquity, the Athenian, Theophrastus (c. 371 – c. 287 BC), a contemporary of Aristotle and Plato, is often considered the father of botany; his Historia Plantarum (‘Enquiry into Plants’) proving influential right through to the Italian Renaissance. Books dedicated to describing herbs and plants and their properties and uses are known as herbals. Such books proved popular with doctors and apothecaries throughout the entire Middle Ages.
Manuscript of Herbarium dated to the end of the twelfth century in England. Image courtesy of the Bodleian Library, Oxford University (MS. Ashmole 1462)The very first printed herbal is De viribus herbarum carmen (‘On the Powers of Herbs’) printed by Arnaldus de Bruxella in Naples in 1477. Arnaldus is rather unusual in that he printed all of his books in one of two roman fonts. His second roman, used in this Latin herbal is rather distinctive and, in my opinion, thoroughly charming, despite the overall too-tight letter-spacing and inconsistencies in the height of capitals. Likewise, Conrad von Megenberg’s Buch der Natur, printed in Augsburg by Johann Bämler and dated October 30, 1475, is for the most part, unillustrated (with the exception of a full-page woodcut of various plants on folio 224v). Moreover, Megenberg’s Buch der Natur, as the title suggests, is not restricted to plant life.
Arnold von Brüssel’s second roman type used 1472–76. Letters of note: L with calligraphic horizontal stroke and an unusually broad F.Recommended reading:

The first illustrated herbal, Herbarium Apulei, was not published until about 1481–3 by the Curial entrepreneur and publisher, Johannes Philippus de Lignamine in Rome and illustrated with 131 woodcuts. Lignamine’s edition was based on a ninth-century manuscript copy from Monte Cassino (MS Casinensis 97). The text is attributed to the otherwise anonymous fourth-century Pseudo-Apuleius (who, in turn, owes a lot to Pliny and Dioscorides). Most surviving copies include a dedicatory letter to Cardinal Francesco Gonzaga but a variant issue exists with a dedication to Cardinal Giuliano della Rovere, the future Pope Julius II.
The first printed and illustrated herbal, Herbarium Apuleii, published by Johannes Philippus de Lignamine in Rome, c. 1481–82. This spread showing a woodcut on the left of, herba artemisia leptafilos, or wormwood. On the right-hand leaf are listed its properties, including its apparent effectiveness in treating ‘serpentis morsum’ (snake bites) and ‘capitis dolorum’ (headaches). Image courtesy of Bayerische Staatsbibliothek.In March of 1484, Peter Schoeffer in Mainz published Herbarius Latinus, an anonymous compilation of numerous texts, illustrated with woodcuts of 150 plants. In the following year, Bernard Breydenbach commissioned Schoeffer to print Gart der Gesundheit, which, although broader in scope, might rightly be considered the first German-language herbal. It proved incredibly popular with at least a dozen other editions appearing before the close of the fifteenth century. It is also the first to break with reliance on medieval manuscript illustrations and is updated with many more morphologically precise depictions of plants. Schoeffer’s edition contains woodcuts of 369 plants.
In 1485, Bernard Breydenbach commissioned Schoeffer to print this first edition of Gart der Gesundheit. Image courtesy of The Metropolitan Museum of Art.In the subsequent centuries, as woodcut was increasingly replaced by intaglio methods of printing, like copperplate engravings, some of the most beautiful herbals make an appearance. Undoubtedly, one of the finest is Elizabeth Blackwell’s A Curious Herbal, published 1737–39 and containing 500 plates. Blackwell’s herbal is also interesting in that almost the entire book is printed intaglio, with both the descriptions and illustrations of plants and herbs engraved into copper plates and printed with a roller press. Only two pages of the introduction are set in moveable type – everything else, including dedications and the title-page are copperplate engravings.
Two of the 500 plates from Elizabeth Blackwell’s A Curious Herbal, initially published as a series of four prints per week, and upon completion published in two volumes.Married to a scallyway in debtors’ prison, Elizabeth produced the book in order to raise funds to secure her husband’s release. The book was a success and her husband, Alexander was freed. He later met his end at the end of a noose in Sweden in 1748, charged with treason.
Detail of plate 211 engraved by Elizabeth Blackwell for her A Curious Herbal.During later centuries, with the rise of chemistry and pharmacology as scientific disciplines, the popularity of herbals waned. Despite the continued medicinal value or curative properties of many herbs and plant extracts detailed in herbals, others were either entirely ineffectual or downright harmful. In the eighteenth century, the English botanist and physician, William Withering, discovered that an active ingredient in the foxglove leaf, prescribed to one of his patients by a herbalist, was effective in treating dropsy, or congestive heart failure. That same chemical extract is used to this day in the cardiac medicine, digoxin. So too with Aloe vera, for centuries used as a demulcent in the treatment of minor burns and cuts. Conversely – and thankfully – the potentially fatal combination of opium and hemlock is no longer recommended as a general anesthetic.
Botany is the school for patience, and its amateurs learn resignation from daily disappointments.–Thomas Jefferson, 1788

During the Middle Ages, if the herbal remedies failed to cure or kill you, then bloodletting – sometimes drawing a patient’s blood until unconsciousness – was still one of the most widespread treatments for just about every kind of ailment from headaches to the plague. Bloodletting, or phlebotomy, was often performed by an unqualified physician or one’s local barber; but worry not, you would not be cut and bled until they had consulted a zodiacal bloodletting chart. Medieval average life expectancy was about 35 years.